What Are the Causes of Mental Illness?

Due to the nature of psychology, finding an exact cause for mental illnesses is challenging. The complex connection between the body and mind makes isolating one single cause of mental illness almost impossible.

However, doctors know contributing factors may change your risk of developing a mental health issue. Things that could increase the risk of mental illnesses may include the environment, society, genetics and biology.

In some people, exposure in utero to environmental toxins or stressors could increase the chances of developing a mental illness. Maternal infections, drug use, excessive drinking or exposure to toxic chemicals could affect the developing fetus and raise the chance of mental health concerns in the future.

Additionally, several environmental factors or circumstances later in life could increase your risk of developing a mental illness. These things include the following:

Social factors, such as socioeconomic status, may also play a role in whether someone has an increased risk of developing a mental illness. For example, the World Health Organization (WHO) conducted a review of published studies on social causes of mental illness. They discovered that 70% of the 115 studies surveyed showed a correlation between poverty and mental disorders. However, the studies varied in how they measured poverty. Some showed low income as a poverty measure that related to more mental health problems. Other studies linked material disadvantage, unemployment and having less education with mental illness.

The WHO suspected that having a low socioeconomic status presented several problems that could also lead to mental health issues. For instance, those in lower socioeconomic strata often lack support and protection from life stressors and don’t have access to resources to mitigate the mental health strain.

The studies WHO examined showed social inequalities led to the early development of mental health problems in children. Children ages 3 to 5 from low socioeconomic backgrounds had more behavioral problems than their peers from wealthier homes. Additionally, older children between 10 and 15 from poverty-stricken households experienced anxiety or depression symptoms at rates of 2.5 times greater than those from a more privileged socioeconomic status.

Just as environmental exposures do not always cause mental illnesses, neither does living in poverty. Many people who grew up in a lower-income environment, or who are currently in that state, do not have mental health problems. Likely, they have better support networks and strong personal coping skills that make them more resilient to the mental strain caused by living with economic disadvantage.

Genes can contribute to the development of mental health problems. However, if you have a genetic predisposition to mental illness, you still may not develop it. Your life experiences and many other factors will determine whether you will experience a mental health disorder.

If one of your blood relatives has a mental health problem, you may want to talk to your doctor about it. Having a close relative with mental illness increases your chances of having a mental disorder yourself. However, it is not a guarantee of having a problem.

Genes may act in several ways to express a mental illness. These genetic factors include the following.

Your biology, such as the chemical balance in your brain, can affect your chances of having a mental health problem. Chemicals known as neurotransmitters deliver information through your brain. In many people, these chemicals and the neural network function properly throughout your life. However, occasionally, a problem with the system that uses neurotransmitters can lead to some issues such as depression, anxiety or other mood disorders.

The biological factors behind mental disorders are why antidepressants and similar medications work for some people. These prescription drugs help reset the brain’s chemical balance, which can ease mental illness symptoms in some.

If Someone in My Family Suffers From Mental Health Issues, Will I, Too?

As noted, having a mental illness in your family does not sentence you to have the condition, too. However, genetics does play a role in increasing your risk for a mental health problem.

Having a mental illness genetic predisposition counts toward increasing your risk much less than most people appreciate. Studies of genetic links often use identical twins, who share the same sets of genes, and fraternal twins, who only have half their genes in common. Studies showing that identical twins have a higher correlation of mental illness development than fraternal twins indicate the chances of a genetic link to the disorder are higher.

When it comes to mental illnesses, some have an obvious genetic component to their development. For instance, bipolar disorder often has a genetic factor. In studies of identical twins, if one twin had the condition, the other twin had up to an 80% chance of also developing it. Similar studies of bipolar disorder in fraternal twins showed that a twin of someone with the disorder had only an 8% chance of having it.

Another mental illness with a genetic link is schizophrenia. In fraternal twins, the chances of developing this condition when the sibling has it were only 14%, compared to 46% for identical twins pairs.

While these findings didn’t pinpoint a single gene that caused any of the mental illnesses, they did find similarities in the genetics of those with mental health problems compared to those without.

If you have a direct family member suffering from mental health problems, you should talk to your doctor or a therapist about your risk. Your primary care doctor can also screen you for signs of a mental disorder and recommend medication or therapy.

Counseling may help you if you have a blood relative with a mental disorder, whether or not you develop one yourself. You may need additional support from a therapist to work through the emotions you feel watching your loved one live with a mental illness.

What Are Signs of a Mental Illness to Watch For?

Whether you have concern for yourself or another family member about developing a mental disorder, you need to learn some red flags that something is wrong. The following are common indications of a developing mental health problem:

What to Do If You Think You Have a Mental Illness

If you identify with several signs of a mental illness, even without risk factors, you could have a mental illness and should get help. First, ask your primary care doctor about a screening and get a health checkup. Some symptoms of mental illness also overlap with physical conditions. For instance, changes in your sleeping patterns could be from a new prescription or a change in your lifestyle. Your doctor can help you find out if physical or lifestyle conditions caused your problem.

If your screening shows you may have a mental disorder and no physical reasons can explain it, you may get a prescription for medications from your doctor or a referral to a therapist or another mental health professional.

While taking medication can help balance your brain chemicals, you still need to seek therapy for a mental health problem to learn ways to change your thinking or cope with the condition. Combining therapy and medications works well for many people. However, you must actively participate in counseling and cooperate in taking your medicine for this treatment plan to be effective. 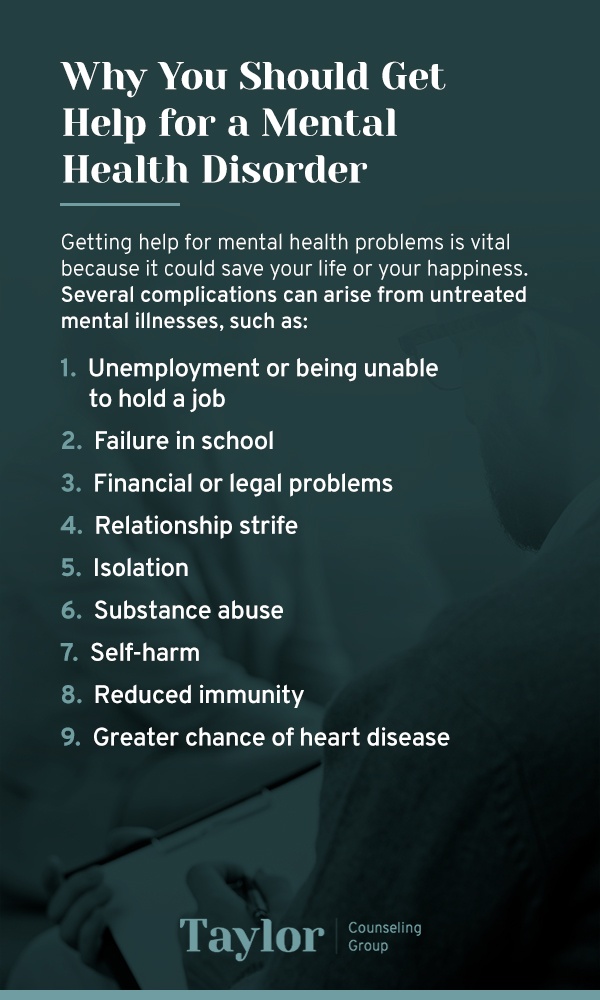 Why You Should Get Help for a Mental Health Disorder

Getting help for mental health problems is vital because it could save your life or your happiness. Several complications can arise from untreated mental illnesses, such as:

If you have a mental disorder, you may not experience all these problems. The longer you go without treatment, though, the higher your chances are of having one or more of these complications. These side effects can make it harder to convince yourself to get the help you need. However, when you feel least willing to get help and your friends and family want you to, that is when you have the greatest need for assistance.

How to Improve Your Mental Health

While mental illnesses have many aspects, you can practice a mentally healthy lifestyle to reduce the impact those have on your mind. Signs of mental wellness include using healthy coping mechanisms to deal with stress, working productively, feeling capable of reaching your goals and contributing to your community and family. Notice that none of these signs of mental wellness include being happy all the time. Life is full of stressors. However, those with good mental health have tools and support to help them to manage most of the problems that come their way.

If you want to improve your mental health, try some of the following strategies. While these may not stop a mental illness from developing, they can help you have better overall mental wellness.

If you need support for a mental illness or want to learn ways to bounce back better from life’s problems, understand that therapy carries no shame. You should feel proud about choosing a self-care method that is no different from going to your primary doctor if you feel physically sick. Therapy can prevent the complications of an untreated mental illness and help you develop good mental health, regardless of your genetic, environmental, biological or societal risk factors. You also don’t have to have a diagnosed problem to seek counseling. Many people go to therapy because they need help with life’s challenges.

Contact us to set up an appointment with Taylor Counseling Group in Central Texas. You can find relief from a struggle with mental illness and find ways to improve your overall mental health, regardless of your genetics. Make the change today by scheduling an appointment.

How to Train Your Brain to Be More Positive